You are here: Home > S.R. 37 stoppages in Martinsville scheduled Nov. 20

MARTINSVILLE, Ind. (Nov. 18, 2019) — Bridge beam installation will require multiple 20-minute stoppages of State Road 37 traffic one afternoon and early evening on or after Wednesday, Nov. 20. Follow I-69 Finish Line on Facebook, Twitter and Instagram for updates as inclement weather may affect the schedule.

Police will assist contractors in stopping both directions of S.R. 37 traffic between S.R. 252/Hospital Drive and Ohio Street/Mahalasville Road. Through traffic is encouraged to use navigation with real-time traffic updates and state highways such as I-70, S.R. 67, S.R. 135 and I-65 to avoid the traffic stoppages.

Concrete beams, each weighing up to 79 tons and measuring up to 130 feet long, are being lifted over the highway for a new bridge connecting South Street with Grand Valley Boulevard businesses in Martinsville.

Lanes to shift for work over highway
S.R. 37 is currently reduced to two lanes, one in each direction, near Martinsville overpass construction with a 45 mph speed limit. These lanes will be shifted over the coming weeks as bridge crews work over the highway. Traffic is encouraged to slow down, stay alert and avoid distractions.

Once the bridge beams are in place, crews must install working platforms, concrete forms and reinforcing steel before new concrete decking and railings may be poured.

Clearing the way
Motorists may see increased activity in Morgan County this winter and spring. Contractors will be clearing trees and demolishing structures to make room for utilities to install new service lines. Drivers should continue to stay alert and slow down for crews working along S.R. 37 and for flaggers on local roads near the highway. 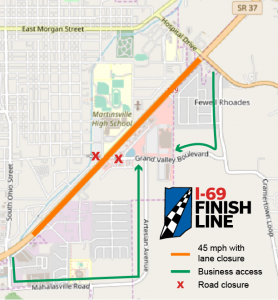