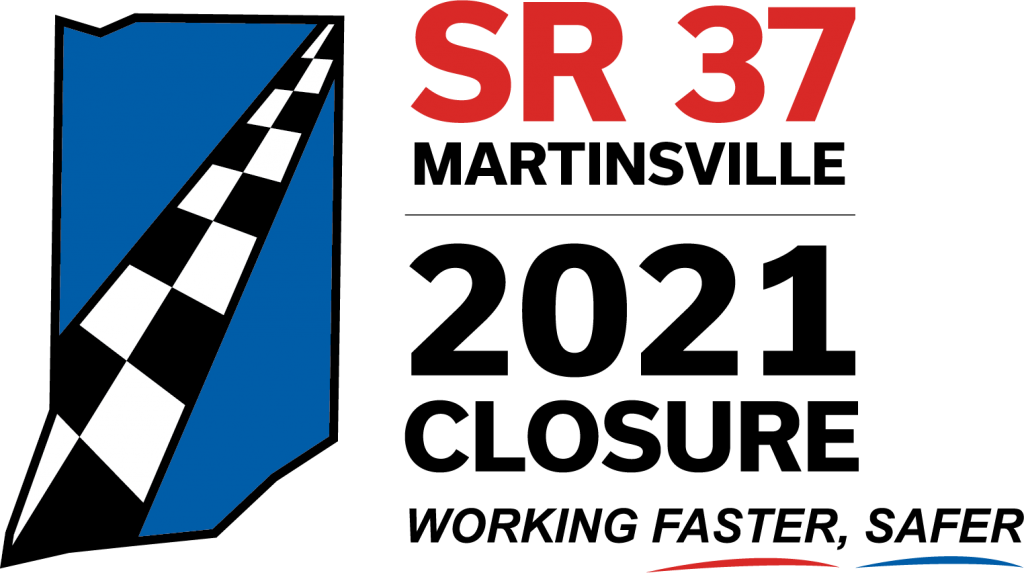 State Road 37 in Martinsville has reopened

S.R. 37 in Martinsville reopened on schedule in late 2021. The full closure allowed crews to work faster and safer, saving a full year of construction. The nearly 5-mile section is signed as the new I-69 with a 65 mph speed limit from the south end of the project, near Indian Creek, to S.R. 44.

What is closed and for how long?

What is the detour?

What is the best way to avoid the S.R. 37 closure altogether?

The I-69 Project Team coordinated with INDOT’s Seymour District to make sure there are no closures on the major north-south and east-west roads adjacent to the I-69 Finish Line project area during the 2021 closure in Martinsville.

Alternate north-south routes that avoid Martinsville completely include I-65 and S.R. 135, both of which connect to S.R. 46 West into Bloomington to reconnect to I-69. In addition, I-70 West to U.S. 231 South to S.R. 46 East in Spencer will also get travelers back onto I-69 in Bloomington.

While these alternate routes will add more time to your trip, they will avoid any potential delays in and around the construction taking place on S.R. 37 in and north of Martinsville.

What is the best way for motorists to get around in Martinsville?

Motorists are encouraged to use navigation with real-time traffic as they adjust to the closure and plan alternate routes.

What is the truck route during the closure?

Trucks should use the official detour of S.R. 39, S.R. 67 and S.R. 144 and other state highways. Only trucks making local deliveries will be able to use Martinsville and Morgan County roads as police are enforcing weight limits.

What was done to prepare for the closure?

Portions of S.R. 39 in Martinsville were widened to four lanes – two in each direction. The S.R. 39 railroad crossing was also rehabilitated.

Crews have also strengthened the northbound shoulder of S.R. 37 and paved emergency pull-offs from Morgan Street to S.R. 144.

Traffic signal preemption is one of the improvements to assist emergency responders. Equipment was installed on Martinsville traffic signals to give first responders the ability to navigate only green lights during emergency runs.

INDOT installed its first Intersection Conflict Warning System (ICWS) in Morgan County at S.R. 144 and Neitzel/Pennington Road. An ICWS includes signage and amber flashers to alert drivers of approaching traffic at two-way, stop-controlled intersections. A major road, S.R. 144 in this case, has higher traffic volume with no stop sign and a minor road (Pennington Road) has lower traffic volume with a stop sign. Vehicle detection equipment under the pavement allows the system to notify motorists of a vehicle approaching an intersection or waiting at a stop sign to enter an intersection.

Many of these improvements will remain in place and enhance area roads for years to come.

Why is this long-term full closure necessary?

Safety and shortening the construction timeline are two of the main benefits of the full closure. By removing live traffic from the construction zone, it’s a safer environment for motorists and workers. The time savings is substantial. The full closure allows work to be completed a full year faster than trying to maintain limited access during the work in the area.

What work is being done?

New pavement and bridges supporting the I-69 lanes are under construction along 17 miles of S.R. 37 from S.R. 144 to the south end of I-69 Finish Line near Indian Creek. Four interchanges will also be built in this area.

What impact will the closure have on emergency responders and others?

The I-69 Project Team has been working with local officials, schools and emergency responders since the planning phase to provide necessary access and reduce delays during construction.

Traffic signal preemption is one of the improvements made to assist emergency responders. Equipment was installed on Martinsville traffic signals to give first responders the ability to navigate only green lights during an emergency run.

Information is shared on a regular basis with ongoing coordination to maintain emergency access to homes, businesses and motorists.

What access will motorists have when the work is complete?

What other long-term restrictions are in place in the area?

You can find the latest I-69 Finish Line Traffic updates on the project website, I69FinishLine.com and sign up for regular project updates.

How can I best prepare for the closure?

Motorists play an important role in the success of the S.R. 37 closure in Martinsville.

Motorists should plan extra travel time and be patient. Commuters should consider working from home or adjusting their departure times. IU football and basketball fans should plan to arrive or depart to avoid peak traffic times. 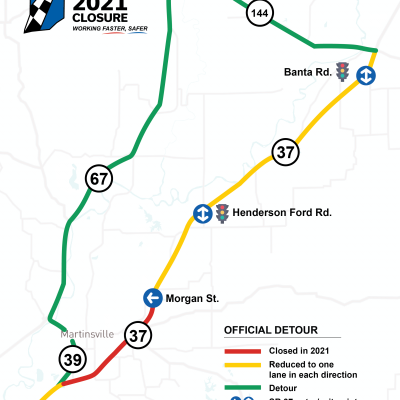 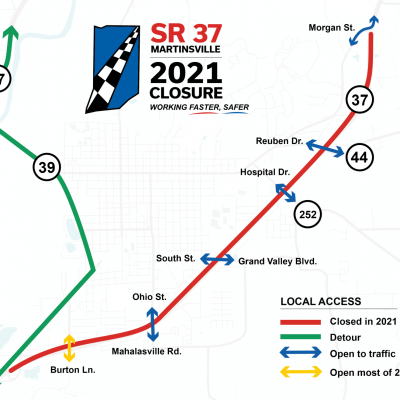 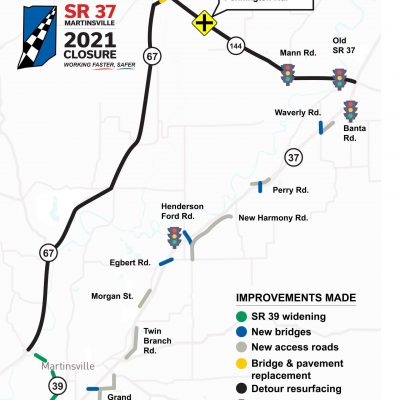 Working Faster, Working Safer
March 2021: S.R. 37 closed in Martinsville in early January, and you can already spot the progress being made on the future I-69. The full closure saves a full year of construction.
Load more
Click to download a Closure Information Card and Contact Card. These are two-sided PDF files. The closure contact card is designed to print business card size (3.5 X 2 inches) and the information card is a 5 X 7 inch card. Copies can also be found at area businesses, the Martinsville Chamber of Commerce and Visit Morgan County.