You are here: Home > Birk Road to close Sept. 18 between Grand Valley Boulevard and Flag Stone Drive in Martinsville

MARTINSVILLE, Ind. (Sept. 17, 2019) — Additional changes are coming this week to the commercial and retail area near Grand Valley Boulevard in Martinsville.

On or after Wednesday, September 18, Birk Road will close between Grand Valley Boulevard and Flag Stone Drive for necessary work associated with the construction and eventual tie-in of the new Grand Valley Boulevard overpass. The section of road will close for approximately eight weeks while crews complete sanitary sewer relocation, paving, and sidewalk and drainage installation.

The speed limit in the S.R. 37 construction zone between S.R. 252 and Ohio Street remains 45 mph and drivers are urged to slow down, use caution and drive without distractions through the area. 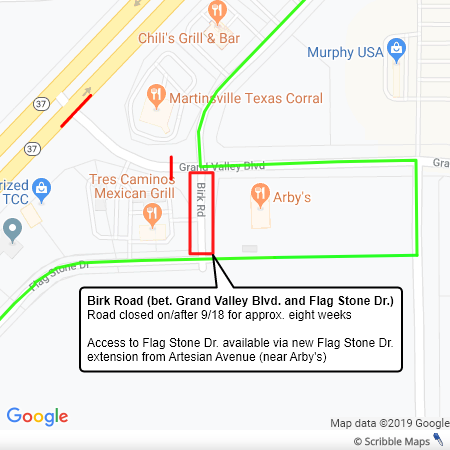 About Next Level Roads
“With a sustainable, data-driven plan in place to fund roads and bridges, Hoosiers can rest assured that Indiana will remain the Crossroads of America for generations to come.” – Governor Eric J. Holcomb

Governor Holcomb’s Next Level Roads plan is a fully-funded, data-driven investment in Indiana’s transportation infrastructure. Implemented in 2017, Next Level Roads dedicates more than $60 billion to construction and maintenance projects for at least the next 20 years to improve and maintain Indiana’s state highways, finish major projects, and plan for the future. The plan fosters partnerships between the state and Hoosier cities, towns, and counties to deliver high-priority local road projects. Next Level Roads is enhancing Indiana’s economic edge and the quality of life for all Hoosiers. View our interactive Next Level Roads construction map at www.nextlevelroads.com.

About the Indiana Department of Transportation
Over the past 100 years, INDOT has transformed the state of Indiana into the Crossroads of America we know today. With six district offices and 3,500 employees, the agency is responsible for constructing and maintaining more than 29,000 lane miles of highways, more than 5,700 bridges, and supporting 4,500 rail miles and 117 airports across the state. Indiana once again ranked #1 in the U.S. for infrastructure in CNBC’s 2019 “America’s Top States for Business” ranking. Learn more about INDOT at in.gov/indot.