Northbound S.R. 37 from Indian Creek will open to two lanes. The left lane will carry northbound through traffic, and the right lane will exit onto S.R. 39.

Traffic on southbound S.R. 37 will be moved to the right lane just south of S.R. 39 so crews can work in the median.

This traffic configuration will be in place for the remainder of this construction season. Dynamic signage will indicate merge points and help prepare drivers for slowing or stopped traffic.

S.R. 39 is being improved this year to safely move more traffic during the 2021 closure of S.R. 37 in Martinsville. Daytime traffic flagging is ongoing on S.R. 39 between S.R. 37 and the White River for pavement patching and utility work. 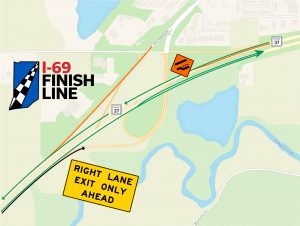